Following Taekje’s death on April 8, 1915, Willem began the legal process to probate the will. Taekje had made a will on February 27, 1912, and had signed it “Taekje Bontekoe van Wijk.” It is likely this will was made in conjunction with her tuberculosis diagnosis. This will had the following points:

Willem lost no time in starting the probate process as he filed the papers opening Taekje’s estate within three weeks of her death. Concerning Taekje’s assets, he only listed two – a half-interest in the 80 acre farm and a half interest in the Pella homestead. No livestock, equipment, cash, or other types of personal property were detailed.

Following this description of the inventory filed by Willem, all the heirs had to be listed. First off were the children of him and Taekje, all living in Pella. He then listed all the Bontekoe children as living in Pella, but there would have been an error here as Dora was at the State Hospital in Mt. Pleasant. Then came the children of his first wife Trijntje – John in Oskaloosa; Dirk, Gysbert, Hendrikus, Allettinus (Tenis), and Hendrika in Sully; Marion and Casper Hendrikus (Harry) in Ocheyedan, Lambartus in Taintor, Jan Willem in Killduff, Willem in “Dakota,” and Cornelius in Pella. Following this report, Willem did nothing else for Taekje’s estate.

Following Willem’s death in 1915, his estate was opened as well. This will was signed on March 22, 1917, just two months before his death, but stated that he was a resident of Pella. It is suspected that this will replaced a will that would have probably been written at the same time Taekje wrote hers. The main points of this will are as follows:

With Willem’s death, the executor of Taekje’s will also died. Because of that, on May 10, 1917, Dirk Van Wyk Hendrika Lanser, and Gysbert Van Wyk made a petition to the court that Lambartus be named as administrator of Taekje’s estate. Additionally, since the property of each estate was practically identical- each being a one-half interest in real estate with very little personal property – the judge also agreed that Taekje’s estate be annexed to Willem’s estate so that they could go through the probate channels at the same time. Lambartus gave a $10,000 bond to perform his duties as executor with his brothers Henry and Dirk acting as sureties for this bond.

In addition to this petition, Hendrika Lanser also signed another petition on the same day: to appoint Dirk Van Wyk as the guardian for his half-sister and half-brothers who were minors: Hendrina, Ben, Johannes, and Gerrit. This guardianship was approved, with Dirk posting a performance bond and his brothers Gysbert and Henry acting as sureties for the bond. In addition, the court appointed local attorney W. H. Lyons as “guardian – Ad Litem” for these minors. The Latin phrase ad litem literally means “for the proceedings,” with this appointment of a third-party guardian to specifically represent the best interests of the minor heirs, a common practice within the court system. 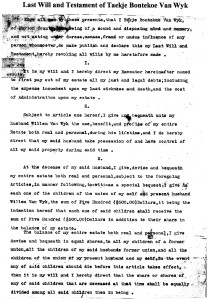 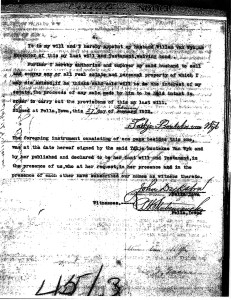 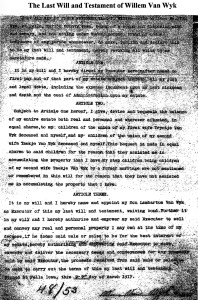 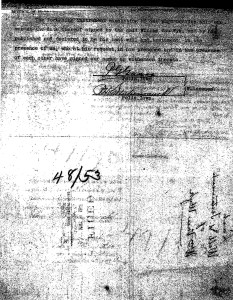 Now that Lambartus had some authority to act, he began the process of turning the estate assets into cash. First, a public auction of the household goods was conducted on May 18. This was very soon after Willem’s death, and it is quite possible that this was already being arranged prior to Willem’s death once everybody was moved out of the house. The cash received from the sale of these goods was $98.00, and was listed as part of the personal property inventory that was filed with the Court on November 5, 1917. Other items of personal property were a cook stove valued at $5.00, rent of $68.20 received on the house through November, a cow valued at $60.00, and an old horse valued at $10.00. The lack of any equipment and other livestock in the inventory listing indicates that the dairy herd and related farming equipment must have been sold off shortly before Willem died. Also in the inventory listing was a note receivable from Cornelius (Neal) Van Wyk. This note was for $1,100, carried an interest rate of 5 ½%, and had been borrowed from Willem on February 28, 1917. Finally, the main assets in the Willem Van Wyk estate were the same as Taekje’s estate – a half interest in the 80 acres of farmland and a half interest in the Pella homestead.

The statement of heirs differed from Taekje’s as Willem specifically excluded the De Bont children from his estate. There had also been some shuffling around of the locations of the remaining heirs. Casper Hendrikus was no longer up in Ocheyedan with this brother Marion, but was back in the Pella area. Willem had moved from “Dakota” and was now living in “Lile,” Minnesota, which possibly refers to the small town of Lyle just north of the Iowa border in northeastern Iowa. Tenis had moved from Sully to Monroe, Neal’s address had changed from Pella to Sully, and Hendrika’s address had changed from Sully to Lynnville. And, of course, the minor children of Willem and Taekje were sent their notifications in care of their half-siblings with whom they were now living.

As part of the notifications to the heirs of Taekje and Willem, Dora Bontekoe would also have to he notified – even though she was judged to be insane, she was, nevertheless, still an heir under Taekje’s will.

The required notifications were sent to the State Hospital in Mt. Pleasant, and were signed for by C. F. Applegate, the hospital Superintendent. In doing so, he wrote “that in my opinion personal service of the attached notice would affect her injuriously, and I, therefore, in accordance with the provision of Section 3525 of the Code of 1916, hereby acknowledge service of the same in behalf of said patient.”  Dora Bontekoe would die in 1918 before the estates were settled and, as a result, her share would go to her heirs, her brothers Robert, Tunis, Jerry, and Peter De Bont.

In addition to listing the assets, Lambartus provided the Court with a listing of the debts. The situation was not all that favorable. Willem still owed the Christian Benevolent Association, where he had borrowed to purchase the farm and homestead, $5,200.00. He owed the Kuyper Lumber Company $533.38, and its owner A.P. Kuyper $50.00. G. A. Vander Meulen & Co. was owed a note of $75.00, and Security Bank in Pella was owed $245.00. Additionally, brothers Harry and Lambartus Van Wyk had advanced a total of $893 .00 to the estate to help pay some immediate bills.

The following year, Dirk Van Wyk, as guardian of Hendrina, Ben, Joe, and Gerrit, made a special request of the court. Dirk reported that he estimated that the minors’ joint interest in the estates of Willem and Taekje would be between $1,000 and $2,000, depending on the estate debts. The cost of boarding Joe and Gerrit had been $200; for the older Ben and Hendrina, the cost of their boarding was offset by the work they could do after school. In addition, all the minors needed clothes. Dirk asked that when the estate Taekje and Willem was settled, that $500 of the minors’ share be used to pay for their board, clothes, and schooling. This was agreed upon by the judge, and a court order was made for it. The eventual distribution of the estate funds from the guardian to these younger Van Wyks did result in some controversy after the estate was settled, and court orders such as this could have been one reason for that controversy. In addition, it must be remembered that feelings could have easily been hurt during this time frame given the tough emotional trauma on these younger Van Wyk children. They were not even teenagers when they lost their mother, sister, and father during a two-year period. And to top it off, in a sense they even lost each other when they were separated and sent off to live with their much older half-siblings. It is very likely that they were expected to do a high level of housework and farm work, but it is certainly not the same for a child to provide a source of labor to half-brothers in strange new surroundings as it is to work for one’s own parents in one’s own home environment. 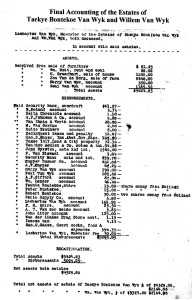 Lambartus Van Wyk continued with his task of settling the estates, requesting to the court that the real estate be sold as that was the only way the estates’ debts could be paid. The Court appointed appraisers to value the real estate and three local individuals with knowledge of real estate – Paul Synhorst, A. N. Vander Linden, and P. G. Gaass – were picked for the task. The property in Pella was valued at $1,000, and the farmland was valued at $115/acre, or $9,900. With this information in hand, Lambartus arranged for a Public Sale of the properties on February 2, 1918, with Van Zante & Worth to be the auctioneering firm. The house in Pella sold for $1,100 to Casper Braafhart and the farmland sold for $10,440 to Johannes Vanden Berg.

The final accounting for the estates was fled on July 26, 1919. Several interesting items are noted in this report: 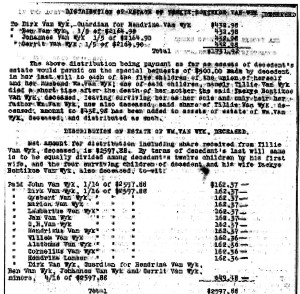 All in all, the total receipts from the estates were $9,424.83; the total disbursements were $5,095.03. This left a difference of $4,329.80, which was split between Willem’s estate and Taekje’s estate, leaving $2,164.90 to each. Taekje’s will stipulated that the children that she had with Willem would each get $500 first; and the remainder would get divided equally between all the Bontekoe and Van Wyk children. Taekje had five children at the time of her death, so they did not even get the full $500; instead, they got $432.98 each which cleared out Taekje’s estate. As little Tillie was alive at the time of Taekje’s death, she was entitled to her 1/5 share of Taekje’s estate. But since she died shortly after Taekje, her share of the estate would have gone to her heir, which would have been Willem. Therefore, the $432.98 was added to Willem’s balance. All of Willem’s children received $162.36 from his estate proceeds. As guardian, Dirk Van Wyk signed off that he had received the $649.48 from Willem’s estate and the $1,731.92 from Taekje’s estate on behalf of the minor heirs.

After the court reviewed the final report and reviewed the work of the executor, on September 30, 1919, Judge J. H. Applegate signed an Order approving this report, discharging Lambartus Van Wyk of his duties as Executor of Willem’s estate and Administrator of Taekje’s estate, and releasing the bond and sureties needed to conduct these final matters concerning the worldly possessions of Willem and Taekje.