The Van Wyk name can be traced back to the village of Wijk, which is on the Maas River. This is a very old town, and in older texts is often spelled as Wijck. It is just a couple miles east of the town of Genderen, which is the village of the more immediate roots of the immigrating Van Wyks. The earliest reference to the town appears to be a letter written in 1125 by Andreas, Bishop of Utrecht, which exempts the people of Aalst from going to church at Wijk, located on the other side of the river, due to the difficult travelling conditions.

There are various theories for the source of the name “Wijk.” One is that it comes from the Dutch verb “wijken” which means “to take refuge.” When the river Maas overflowed its banks, the land was inundated, so a refuge (wijck) was built on a hill. This structure became known as “The House on the Hill” (Het Huys op den Bergh), and was the home of Willem van Wijk, one of the more prominent inhabitants of Wijck. His father, Jan van Wijk, was inducted as a knight following his participation in a Crusade to the Holy Land during the 14th century.

Another possible source of the name comes from the Latin word “viscus” which has a variety of meanings such as a row of houses, a section of a city, or a hamlet. This usage remains in the Dutch language today, with the modern noun “wijk” roughly the equivalent of our English word “neighborhood.” The –wijk ending is common with many Dutch town names, such as Rijswijk, Sleeuwijk, Beverwijk, etc. This same Latin word has found its way into English in the town name endings of -wick, such as Keswick, New Brunswick, Berwick, etc. 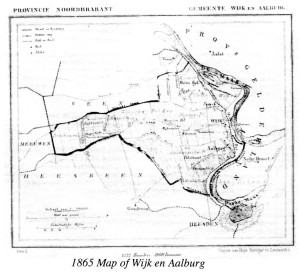 The town of Wijk played a role in dispensing local lower-court justice, as a manor had been placed there. In those feudal times, the manor system was the organizing principal of the rural economy, with the legal and economic authority vested in the lord of the manor. The exact date of creating this manor is unclear, but it was likely in place by the year 1200. While Wijk never had any castles, in addition to the “House on the Hill” it was unique in having several fortified estates, with names such as Kronenburg, Eijkestein, and Wijkestein. It is probable that these were owned by the noblemen of society that lived in nearby Heusden, who were attracted to Wijck for its environment. An observer wrote in 1651: “There is no village which has more beautiful forelands (land between the river dikes and the river itself) than the village of Wijck.” While the feudal system gradually faded away, Wijk did maintain itself as a local court center for many years while the Dutch governmental landscape changed. By 1811, Wijk had a court with seven justices that dealt with small- and middle-level court issues, with higher-level court cases always going to either Heusden or Genderen.

When Napoleon of France occupied the Netherlands in various forms from 1795 to 1815 the former era of rule by noblemen and landed estates gradually came to an end, being replaced by a mayor and council. The Dutch combined governmental unit of a town and surrounding countryside is known as a gemeente, which would be the equivalent to the American concept of a combined county and city government. Both Wijk and Aalburg were each given gemeente status, but this lasted for just a few years, and around 1806, they were consolidated into one entity known as Wijk en Aalburg. Wijk was decidedly the larger of the two, as in 1858 Wijk had around 1,250 inhabitants and Aalburg didn’t even have 400. Consolidation continued with neighboring entities, with the gemeentes of Veen and Eethen entering the fold, which themselves were composed of several smaller gemeentes, including Genderen and Doeveren. In 1973, this brand new gemeente was named Aalburg, and the former village of Wijk is now known by its consolidated name of Wijk en Aalburg. As of 2011, gemeente Aalburg consisted of around 12,700 residents, with the town of Wijk en Aalburg being by far the largest in the gemeente with 6,200 residents. Gemeente Aalburg is part of a 4-gemeente region known as The Land of Heusden and Altena a reference to the noblemen and counts that ruled the area at one point in history.

At present, there remains just one remnant of the old village of Wijck that hearkens back to its medieval history–the tower of the old church, with the attached building long gone. And only the bottom part of the tower exists, as the top part was destroyed during World War II. However, legend has it that just as a Van Wijck placed the first stone in the choir of the church in 1395, another Van Wyk made it possible to restore this tower to its former glory in 1945.