The 1915 State of Iowa census was the last time the Van Wyk family would be officially counted by a government agency. The family was still on the farm in Lake Prairie South Township with Willem reporting that during his lifetime he had had eight years of school. Despite being in America for 23 years, he had never become a citizen of the United States. The language barrier may have prevented him from completing the necessary requirements. He reported that the farm was worth $8,000, and that he still owed $2,900 on it. This amount of debt may have been understated, as in less than two years the Van Wyk estate would reflect that he owed twice that amount in total debts. Additionally, this census asked farmers to report their livestock holdings, and the Van Wyks had ten milk cows worth a total of $500, eight calves under one year old worth $144, one horse between one and two years old worth $75, and one horse over two years old worth $125. This large number of milk cows reflects their involvement in the dairy industry as this was way more cows than were needed to supply milk for the family. Finally, it was reported that the Van Wyks had 400 “fowls” worth $200, so it seems that selling eggs was likely a source of income as well.

The census reflected data as of January 1, 1915, and still showed a family mixture. In addition to the five younger children, 21-year old Neal Van Wyk and 17-year old Pete Bontekoe called this farm their home.

Taekje’s health continued to worsen and, at the end of 1914, the family moved to their property in South Pella. It is presumed that some of the older children, possibly Neal and Pete, stayed on the farm to manage the dairy operation there as this farm would not be sold until the estate was settled. On the morning of April 8, 1915, Taekje finally succumbed to tuberculosis, living just past the age of 51.

The thank you notices posted by her family mentioned the lengthy nature of her illness. She was buried in the Tigchelaar plot in Graceland Cemetery, often in those days referred to as “het Noorder kerkhof’ (the North cemetery) since it was on the north side of town, or the “Eerste Gereformeerde Kerkhof’ (First Reformed cemetery) since its origins were through the First Reformed Church in Pella.

For the second time in his life, Willem now had to care for a motherless family. But in this instance there were no older children in the household to help out as the oldest daughter, Hendrina, was only 11. Also, Willem was far older—the first time he became a widower, in 1893, he was 44. Now he was 66, which would have been difficult under normal circumstances. But the circumstances were not normal, due to the increasing care necessary for his youngest daughter, Tillie. Tillie had been reported to be suffering from “brain fever,” which is an old term no longer in medical use, and typically refers to the incurable disease of either encephalitis or meningitis.  She was not feeling well at the time of her mother’s death and was cared for by others while the rest of the family went to the cemetery. The April 23, 1915, Weekblad reported her getting some better, but this proved to be short-lived as on May 4, 1915, at just over 6 years of age, little Tillie died at her home.

Her death certificate confirmed that meningitis was the cause of death. She was also laid to rest in the Tigchelaar plot at Graceland Cemetery, with the overturned soil still quite fresh as her mother had been buried there less than a month before. The old grandfather, Theunis Tigchelaar, who was still living in Pella, would bear witness to three generations of the Tigchelaar family women being buried there within a short time period—his wife Dieuwke in 1911, his daughter Taekje in 1915, and his granddaughter Tillie also in 1915.

The death of Tillie – remembered as a pretty little girl with long blond curly hair – was a tough one for Willem to bear. To begin with, watching a 6-year old suffer and die from a disease, particularly as this little girl herself had just gone through the trauma of the death of her mother, had to be heart wrenching. Secondly, she was the “baby” of a very big family so was likely the object of affection by older brothers and sisters. And finally, in the family she was one of very few girls (4) surrounded by a host of boys (18), with this also naturally putting her in a position to receive some favorable attention by the rest of the family. The fact that Tillie died on Willem’s birthday was probably a painful memory for the one remaining birthday he was to have, and would give him very little cause for celebration.

After these family losses, the Van Wyk family continued to plod forward together receiving assistance from others for the housework and laundry. It is believed that the retail dairy farm operation continued to be managed for a time by the older unmarried boys, as evidenced by bills for “milk tickets” at the local printing company that were dated in November of 1916 and April of 1917 and had to be paid by the estate. However, Willem’s health began to deteriorate as he contracted stomach cancer, and by late 1916 it was determined that some changes had to be made. Willem moved to Jasper County to stay with his daughter, Hendrika Lanser. Hendrina (Irene) went to the Oskaloosa area to stay with the family of her half-brother John, who was 30 years older than she. There she could find companionship with four of her nephews and nieces, two of which would have been older than she. Twelve-year old Ben went to stay at the house of his half-brother Tenis near Monroe. Tenis had just gotten married the year before and likely welcomed some additional help on the farm. Ten year old twins Joe and Gerrit went to their half-brothers Neal and Harry, respectively, who lived very close to each other, south of Sully on separate farms, near the Mahaska-Jasper County line.

Willem Van Wyk was nursed by his daughter Hendrika, who lived near Lynnville, throughout his ﬁnal days. He died at her house on May 1, l917, from stomach cancer.

The physician who attended Willem was the familiar Dr. Frank E. Quire of Lynnville, who formerly had a practice in the Peoria area and assisted with the medical treatment of Dora Bontekoe. The undertaker was A.T. Gifford from Lynnville, which is where the funeral service took place. Similar to his first wife Trijntje, who died on her 40th birthday, Willem died just three days prior to his 68th birthday. He was laid to rest next to his first wife in Hewitt Cemetery near Galesburg on his 68th birthday. 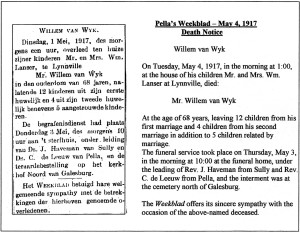 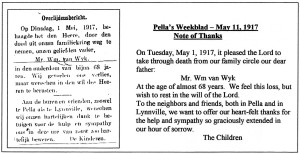 This photo was taken on the day of Willem Van Wyk’s funeral, May 4, 1917, at the farm home of Hendrika and William Lanser, Sully, Iowa.

Seated according to age.