Willem van Wijk’s second wife was Taekje Tigchelaar Bontekoe. Her life consisted of an intriguing but often tragic series of events that brought her from the northern Dutch agricultural province of Friesland in the Netherlands to the farm state of Iowa in America.

Taekje Theunis Tigchelaar was born in Pietersbierum, Friesland, on February 22, 1864. Pietersbierum lies on the west coast of Friesland just a mile from the North Sea, and is near the larger city of Harlingen.  “Tigchelaar” means “tile maker” in Dutch, and there were many tile factories in this area, leading several families in the area to choose this as their surname when ordered by Napoleon to pick one. Taekje’s grandfather, Jelle Theunis Tigehelaar, gave his occupation as kilnman, tilebaker, and tile-maker apprentice on various documents throughout his life, indicating that he was involved in this industry as well. Taekje’s father was Theunis Jelles Tigchelaar, the son of Jelle Theunis Tigchelaar and Johanna Jans Oosterhout. Her mother was Dieuwke Berends Faber, the daughter of Berend Sybes Faber and Taekje Dirks Kolthof, with this latter maternal grandmother being the namesake of Taekje.

Wedding Certiﬁcate (and translation) of Pieter Bontekoe and Taekje Tigchelaar 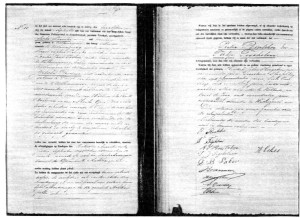 No. 54 In the year one thousand eight hundred and eighty-five, the fifth day of September, before me the Official of the Civil Registry of the community of Kollumerland en Nieuwkruisland, province of Friesland, appeared: Pieter Bontekoe, twenty-three years old, occupation of laborer, living at Oudwoude, legal – aged son of Ruurd Simons Bontekoe and Antje Pieters Lofma, both here present and giving their permission for this marriage; and Taekje Tigchelaar, twenty-one years old, born at Pieetersbierum, occupation of servant girl, living at Oudwoude, minor-aged daughter of Theunis Jelles Tigchelaar and Dieuwke Berends Faber, living at Oudwoude, both here present and giving their permission for this marriage who have requested that I solemnize the heretofore marriage, of which the pronouncements were made the Sundays of the sixteenth and twenty-third of the past August within this community, with no objections having been made. And for this purpose the appearers have given their birth certiﬁcates over to me. After which I have publicly asked them whether they take each other to be spouses, and faithfully all duties shall fulfill, which through marriage they are bound to perform by law — of which from each on privately a consenting answer had given, have I in the name of the Law declared that Pieter Bontekoe and Taekje Tigchelaar named above, are united to each other in marriage. After which I have prepared this document and after reading it out aloud have signed in presence of the witnesses, Hendrik Johan Hoogeboom, forty-eight years old, Secretary, Hessel Keegstra, thirty-seven years old, Siebe Ouddiep, thirty-one years old, both constables, all living at Kollum, and Evert de Jong, thirty-one years old, constable, living at Westergeest. The witnesses are not related to the parties. Declaring the mother of the bride that she is unable to write.

On September 9, 1885, Taekje married Pieter Ruurds Bontekoe in the County of Kollumerland. This is significantly further east from her birthplace, as it lies next to the province of Groningen. How Taekje and Pieter met is unknown, as it doesn’t appear the rest of the Tigchelaar family ever moved to this area, which for several generations was the home base of the Bontekoes. Pieter Ruurds Bontekoe was born in Kollum on January l, 1862, to Ruurd Simons Bontekoe and Antje Pieters Lofma. Pieter and Taekje settled in the village of Oudwoude, which is where their six children were born—Ruurd (Robert), Theunis (died within two weeks of birth), Dieuwke (Dora), Teunis (Tunis), Sierk (Jerry), and Pieter (Peter). This last child, Pieter, was born to Taekje as a widow, as her husband Pieter had died just a couple of months before on November 15, 1896. So at age 32 Taekje was faced with the ominous prospect of raising five children with no outside income, with the youngest child a newborn and her oldest just 11 years old. Her parents, the Tigchelaars, had immigrated to America a year earlier.

Taekje’s future became even more uncertain when as a widow she became pregnant with another child. Anneke Tigchelaar was born in nearby Westergeest on December 19, 1898. The birth certificate does not give the name of the father. The tough economic reality as well as the social stigma must have been extremely difficult for Taekje to bear, so she decided to immigrate with her Bontekoe children to Iowa.  On May 23, 1899, she boarded the ship Rotterdam to begin her new life in America. But there remains a question – little Anneke Tigchelaar did not go with her mother. Anneke is not listed on the ship’s manifest, even though Dutch records state that she left for America. There is no record that Anneke died before the family left for the Netherlands, or that she died at sea, or that she arrived in America. A rumor that persisted with family members in America is that Anneke was “sold” to raise money for the passage fare to Iowa. This seems far-fetched, particularly since it is noted on the ship’s passenger manifest that the passage fare of Taekje and her children was paid for by her father, Tunis Tigchelaar.

Additionally, it is noted that in the 1900 census, Taekje stated that she had seven children with five living, and in the 1910 census, she stated that she had twelve children with ten living. These numbers would match the deaths of the 2-week old Theunis and Anneke. So, did Anneke die en route as the Bontekoe family travelled from Friesland in the north to the harbor of Rotterdam in the south, resulting in an unrecorded death in an unknown grave? Or, did somebody actually take in Anneke to raise as their own child, possibly connected to the unknown biological father? In any event, this disappearance of Anneke will always remain a mystery in the family tree. 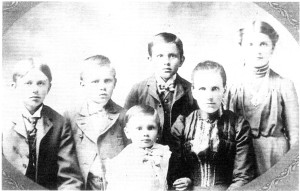 The Holland-Amerika ship Rotterdam arrived at Ellis Island on June 4, 1899, and from there Taekje and her five children went by train to Pella. Pella was a logical destination for the Bontekoes as Taekje’s parents, Theunis and Dieuwke Tigchelaar, had immigrated to Pella in 1888 and had settled on an area farm they had purchased. The Tigchelaars had eight children all together, but only four survived to adulthood, including Taekje. The other three immigrated along with their parents to Iowa: Johanna, who married Cornelius Muilenburg and settled in Oklahoma; Berend (also known as Ben) who married Maggie Van Zee and who farmed in Marion County; and Pietje (also known as Nellie) who married Andrew N. Vander Meulen and lived for a time near Barney, Iowa, (Madison County) but eventually ended up back in Marion County. Dieuwke died in 1911 and Theunis lived to the ripe old age of 93, dying in 1924 at the Home for the Aged, now known as Fair Haven. It is interesting to note that while Theunis was living at the time of Taekje’s death in 1915, he was not mentioned as a survivor in her obituary.

In addition to the new location to America, Taekje’s family also adopted a new name. Their original name of “Bontekoe” literally means “spotted cow,” and this was changed to De Bont. The reason for the name change remains another mystery, giving some sense that the family wanted to cut all ties with their old lives in the Netherlands. The usage of the new name was not very consistent; however, as it noted that the children gave their last names as “Bontekoe” when they placed a thank-you announcement in Pella’s Weekblad following the death of Taekje. The distinctly Frisian first names of the Bontekoe family also were Americanized, with Taekje typically referenced as “Tillie” during her time in Iowa.

During Tillie’s early years in Iowa, the Bontekoe children grew up and went out on their own. According to the census, already in 1900 the oldest son Robert (Ruurd) was not living with her and the other four children—at age 15, he was likely already living with somebody else and working as a hired hand to earn money to support the family. By 1910, all the others were out of the household. One of the hardest losses for Tillie must have been the departure of Dora, who at some point was transferred to the “State Hospital for the Insane” in Mount Pleasant.

The 1900 federal census showed Tillie living in a rented house in Pella with the very non-glamorous career of “servant.” Nonetheless, one can only imagine that Tillie was relieved to be on her own in a country which did not have the class system that was still very prevalent in the Netherlands, to be near her parents and siblings who could offer support, and to be away from all the tough memories of her life in Friesland. Additionally, Tillie’s life would soon change again, because in just over two years she would again be a wife and new mother following her marriage to Willem Van Wyk.