Netherlands is located in the northeast part of Europe. It borders the North Sea to the north and west Belgium to the south, and Germany to the east. It is often referred to as Holland, although North and South Holland are actually only two of its twelve provinces. Netherlands is a small country — Iowa is about three times the size of the entire country of Netherlands. It has a total of 16,033 square miles, and of that about three-fourths (13,082 square miles) is land and about one-fourth (2,951 square miles) is water.

Netherlands is a geographically low-lying country and about half the country’s area is below sea level, making the famous Dutch dikes a requisite for efficient land use. Signiﬁcant land area has been gained through land reclamation and preserved through an elaborate system of polders and dikes. Most of the country is very flat, with the exception of foothills in the far southeast and several low-hill ranges in the central parts. 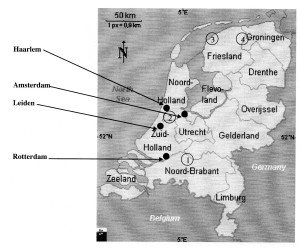 MAP OF THE NETHERLANDS
WITH THE IMPORTANT VAN WIJK SITES NOTED

Life in the Netherlands ->